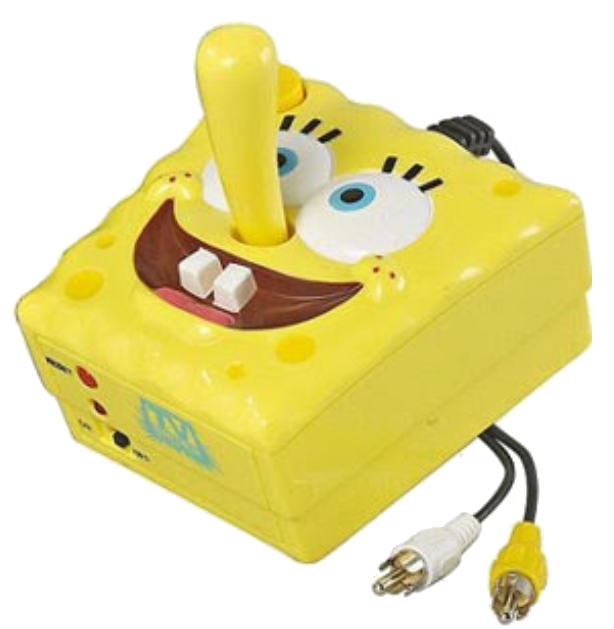 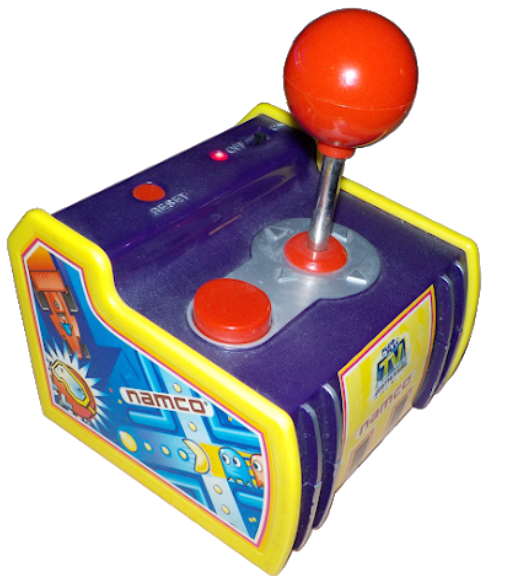 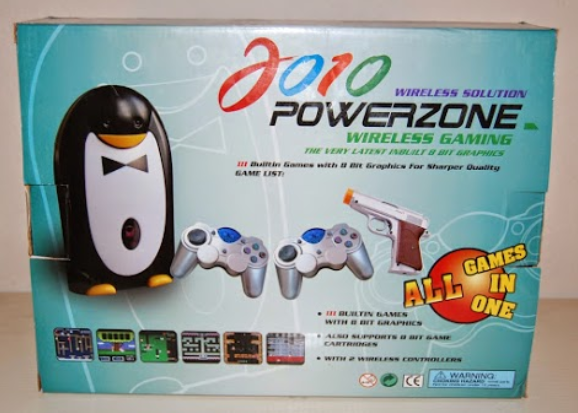 Although it’s from 2010, it’s exactly as I remembered it. Also, do those controllers resemble the PSX ones? Image from Super Retro Bros. 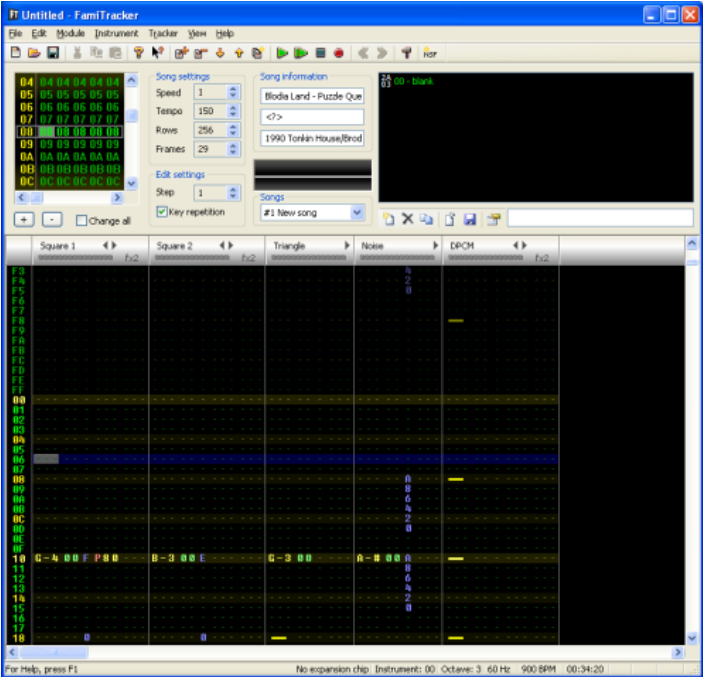 FamiTracker layout, with the internal 2A03 chip and no expansions.

_ What’s up, everybody? I was looking back at the blog the other day, and saw that a lot of our content is really similar, and starting to get a little stale. So, in the effort of keeping things fresh, I thought it’d be a good idea to start introducing some new kinds of content to the blog to just see what works and what doesn’t work. This article below is a recollection penned by Cafè_ OG SuperJet Spade who wanted to share his story of how he discovered Chiptunes with us. Anyways, I’ll go ahead and hand it off to him, but be sure to let us know if you enjoy this kind of content if you’d like to see more stuff like it in the future!

So, where do I begin? Let’s go all the way back to early 2000. I was 3 years old and my sister was only a couple of months old. I had a Nintendo GameBoy Color, and the four games I remember playing on it were Super Mario Land, Donkey Kong ‘94, Rampage: Universal Tour, and a Pokemon game that I can’t remember which version. If you know anything about the GameBoy/Color’s sound capabilities, you’ll know that it has 4 channels, of which it has 2 pulse wave channels, a programmable wavetable channel, and a noise channel. I highly enjoyed the songs that were playing from the four games I previously mentioned, and it probably sparked my interest in music (since I was imagining some games with custom characters and music).

Sometime in 2003, my parents got a SpongeBob plug-and-play TV game. Being the little kid I was at the time, I liked SpongeBob SquarePants, so I really had fun playing it. I did notice that the console didn’t play any sampled sounds, rather it was all “bleeps and bloops” (as most chiptune musicians would say nowadays). From watching a video two years ago of a playthrough, I can determine that the developers had probably used a NOAC (Nintendo-On-A-Chip) for the sound (though the 50% pulse wave is ever used for it). Like the GameBoy Color, I don’t know what happened to it, but it’s probably a case where it stopped working one day and it got thrown out. Around Christmas Eve 2006, over at one of my late aunt’s house, I was at the basement where my cousins were hanging out. They were playing a plug-and-play TV game which had various Namco games from the 1980s, including Pac-Man, Rally-X, among others. They let me play some of the games, and I really enjoyed playing them. Once again, the sound didn’t use any samples, being all “bleeps and bloops” once again (I did notice that it sounded different compared to the SpongeBob plug-and-play I played three years earlier, but I know why now).

On Christmas Day of 2003, I got a Cobalt Blue Nintendo GameBoy Advance SP. The first game (which I had also got on Christmas that same day) I can recall playing on this system was Yoshi’s Island: Super Mario Advance 3 (a port of the SNES game Super Mario World 2: Yoshi’s Island). I did play other GBA games, including one of the Mega Man Battle Network games, but I played SMA3 the most, and thus I enjoyed listening to its soundtrack a lot. Sometime in 2004, I got the GBA port of DKC2, which I had also played a lot, and I immediately liked its soundtrack as well (even though I never got past Lava Lagoon, which I hated so much). The GBA and SP models have two DirectSound channels panned to the left and right, and does music using some kind of software mixing, but it does have four GameBoy-compatible sound channels, and some of the games I played did make use of these GameBoy channels (either for music or sound effects). At this point, I don’t remember what happened to the GameBoy Color I had, but at least the GBA is backwards compatible with the GameBoy and GameBoy Color, so I didn’t worry too much about it.

Around 2007, my parents got one of those cheap, Chinese “Famiclones” (Famicom Clones). At this point, I had already moved to another state. The console was penguin-shaped and had a bunch of NES games slapped on to it. This is my earliest memory of discovering the existence of the NES and I discovered Super Mario Bros, the NES game from 1985. I knew of the game existing since I watched some YouTube videos about it, but it was my first time playing the game. I did try going for the warped route (take the warps to World 4 and 8 in 1-2 and 4-2 respectively), but I got a game over, so I tried going for the warpless route and got a game over again. I usually brush off the game overs nowadays, but as a kid, you tend to get frustrated seeing those game overs. But, I did have fun and enjoy playing the game, even though the cheap “Famiclone” didn’t last long (it stopped working after a couple of weeks if I recall). So, as a little kid, I had discovered 8-bit music and sounds.

After 6 years of discovering other NES games, in 2013, I discovered homebrew games, of which I saw a TAS of the game Inversion, created by Lucas “Dizzy9” Kur. At this point, I’m attending a private school. I was intrigued that people were making new games for the old video game consoles. It was also at this point where I was curious about how people were getting music and sounds into these old consoles. Not bothering to do internet research, I determined that there was some kind of trickery being done to get the music and sounds into these old consoles (of course, now I know that they have a soundchip somewhere in their motherboards). I was also becoming interested in wanting to make music that could play on these old consoles. In 2014, I attempted to do just that when I tried Addmusick, but decided to give up soon afterwards since I thought that MML (Music Macro Language) was hard to learn though. It was also at this point where I discovered FamiTracker, a program that makes music for the NES/Famicom, including all of its expansion chips (although the Sunsoft 5B was not supported at the time). I had also learned about soundchips, including their capabilities and limitations (and finding out why the sound effects were cutting off some instruments in some of TASes I watched). While I did become interested in all of this, I had left it off to the side for the time being.

2014 also marked something significant for me. It was when I actually started making music, not chiptunes though. I discovered an app on my iPad in November 2014 called Auxy (the classic version, which has since been superseded by Auxy Studio). It allowed anyone without musical knowledge or background to make music with relative ease. I gave it a try and was really pleased with it (though the very first song I created isn’t up to my current standards: https://youtu.be/CcuUTxHnfc4?t=42). From there on, I created a bunch of music with this app, and on a couple of more music-making apps that I would discover over the months, while still watching runs of games from old video game consoles. I rekindled my interest in wanting to make chiptune music at the start of 2016. However, rather than have second thoughts about it, I decided to go ahead start making chiptunes, starting with downloading FamiTracker in February 2016. While confused at first (since I never used a tracker music program), the program’s help HTML helped so much and I was able to make my very first chiptune song. For around 10 to 11 months, I would intermittently switch between making chiptunes (mostly covers) and modern music on my iPad (also discovering Deflemask in the process in August 2016), before I became less interested in the latter in 2017. In 2018, my interest in chiptune music overtook my interest in the modern music-making apps.

And to this day, I’m still making chiptune music. This has been quite an interesting journey for me. If it weren’t for the GameBoy Color I had when I was 3, I probably wouldn’t be making chiptunes today. Making chiptunes has really made me appreciate the old video game consoles a lot more than I did back in 2014, and it also allowed me to step out of my comfort zone and interact with chiptune communities (e.g. Chiptunes = WIN, The Chiptune Cafè, etc). Now, what have I’ve been up to these days? Well, I released an album on January 7 called The Final Bits (you can find the link to it at the “What songs have I made?” page on my website). For around 2 years, I’ve pumped out a bunch of covers (and originals starting in 2017) within a short time of making them, but I’ve decided to slow down for this year, 2019, mostly due to being “burned out” from making said covers and originals (and some other reasons, which I won’t get into), but I won’t stop making chiptunes! Who knows what the future has in store for me?

Thank you for taking the time to read my journey, and hopefully it will inspire someone out there. Have a nice day! 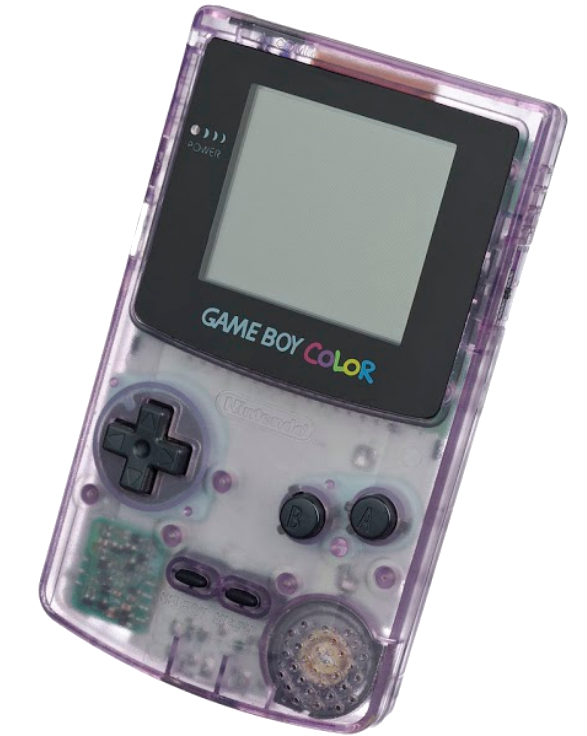 Atomic Purple GameBoy Color, just like the one I had when I was a little kid. 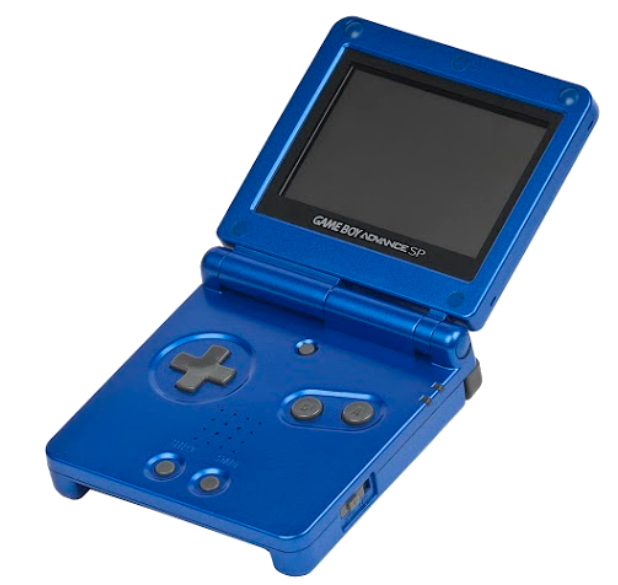 Cobalt Blue GameBoy Advance SP. I kept this one until 2010, when I decided to give it away to one of my cousins. 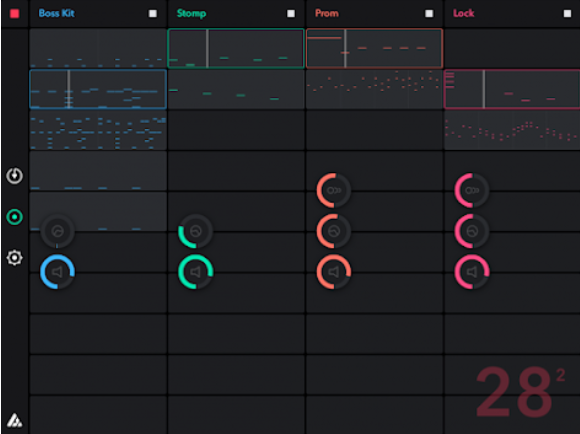